Creating a Nation in One Room

For museums to succeed in the age of multiple social media channels and in-your-pocket entertainment, they have to move beyond the stereotype of dusty glass cases and typewritten placards. Museums that succeed today present experiences that entertain, engage and educate visitors in dazzling and spectacular ways.

MediaMerge has been on the cutting-edge of this trend, first using talking portraits at the Boston Tea Party Ships and Museum, and now creating an exhibit entitled Independence! in the west wing of Independence Hall at American Village in Montevallo, Alabama, opening November of 2021. 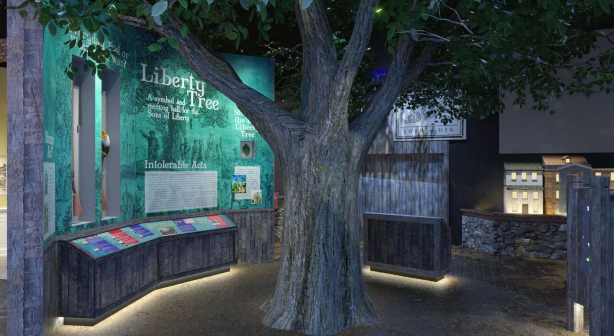 The exhibit transports visitors back to revolutionary Boston on the eve of Paul Revere’s ride. It includes displays depicting the Boston Tea Party, the Green Dragon Tavern where the Sons of Liberty met to form plans for the revolution, the Boston State House which features a digital animation of the Boston Massacre and the Old North Church where the warning signal was sent to the colonists that the British were coming. The wing is dominated by the centerpiece of the exhibit, the Liberty Tree. 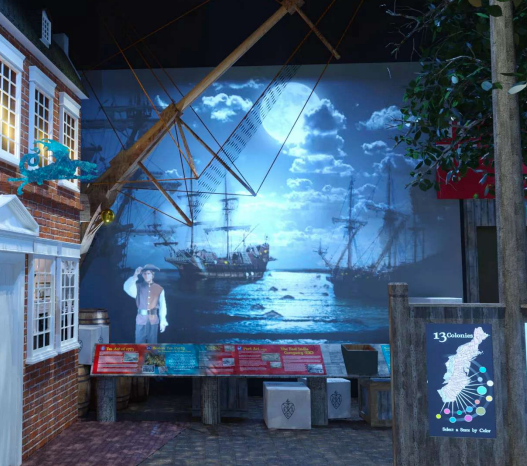 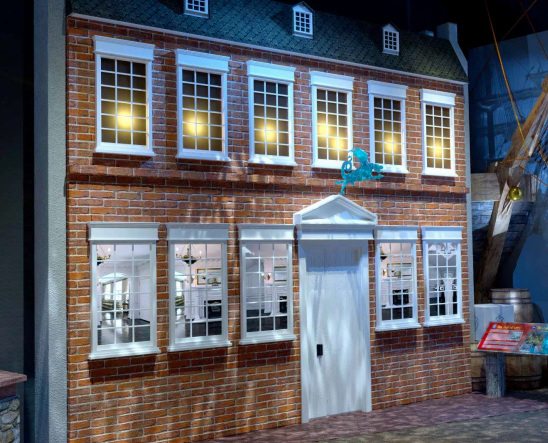 As visitors work their way through the exhibit, they are led into the back wing which features a theater with a 31-foot screen that will play a film created for the museum experience titled, We Choose to Be An American People. The 30-minute film summarizes the events that led to the revolution, starting with the Intolerable Acts. 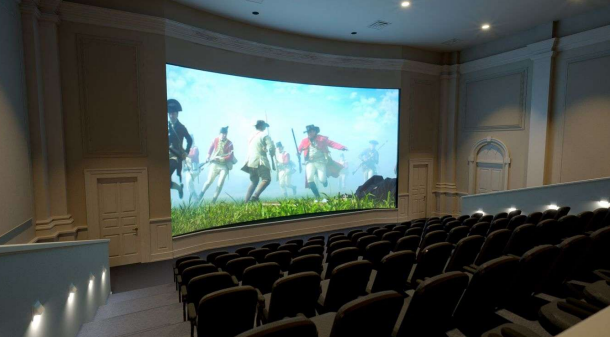 Packing the birth of a nation into one wing of a building was only one of the challenges MediaMerge tackled in this project. “Anytime you introduce new content into an existing museum it's a challenge to understand how the new information will tie in with the existing programs,” says Ken McKibben, CEO and founder of MediaMerge. “To top it off, the majority of the project was done in the middle of the COVID shutdown. Communication was challenging as everyone was getting used to the pivot from in-person site meetings to online meetings.”

The challenges just made the design and build teams even more aware of the importance of communication. “We worked closely with our clients. MediaMerge is a bit unusual in this regard,” McKibben adds, “because most technology companies steer clear of the creative content side of the equation, but by being totally immersed in the history and the content, we were able to help fill in a lot of blanks along the way and tie everything together.”

As with all MediaMerge’s historic museum projects, meticulous attention to detail rules the day.

“It’s important to get the details right because the people took risks and sacrifices to achieve what we have, and we owe it to them to portray the details the best way we can. People look at us and they wonder what it was like,” says American Village interpreter Nancy Estes. “Our objective is to help our audience truly understand what the people were going through. All jackets and gowns are cut as they would have back in that time. It really changes your entire body and the way that you move when you’re dressed in this authentic clothing.”

Connecting Through A Sensory Experience

While authenticity is one way of connecting with the audience, technology and spectacle help connect with the audience in a memorable way, invoking the senses to make a connection and imprint a memory.

“We’re very proud to introduce a lot of cutting-edge technology in this wing of Independence Hall,” says American Village marketing director Melanie Poole. “In the foyer, there are sensory experiences where you will be able to smell the tea from the Boston Tea Party. You can step up to the windows near the Green Dragon tavern and eavesdrop on the whispered conversations inside.”

Once in the theater, the experience takes on a new feeling. “There are seat shakers that are synchronized to move when the cannons fire. You’ll probably jump out of your seat the first time you feel it,” she excitedly adds. “And when the muskets fire in the film, air cannons strike the audience, so they will feel like they are being hit with musket balls.”

Melanie admits that connecting with a younger audience requires experiences that engage their imaginations. “We know that young people learn differently than adults. They are very tactile, so everything we do at American Village is first-person interpretation,” Poole says. “We put those young people right in the scenes of history. They are participants in history rather than learning about it through a book or a lecture.”

She’s first to admit that good exhibits have an obligation to go beyond mere entertainment. They must teach, too. When the Colonists decided to break away from England it was a decision of great consequence, and she wants to make sure visitors get close to an understanding of that experience. “These were people who made decisions that were seditious, and the punishment was death. Taking their life into their own hands when they made the decisions to be a free people to be an independent nation. This exhibit puts young people right in the scenes of history.”

Whether it's standing under the leaves of the Liberty Tree or watching Charlestown burn as cannons blast overhead, the environments are designed to overwhelm your senses.

“We're all drawn to human stories, McKibben says, “and the entire facility is designed to engage you with a wide range of them starting the moment you walk in the door.”

You might not have participated in the American Revolution, but this exhibit is the closest thing to it.