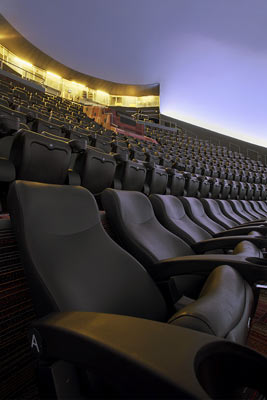 There's always been something magical about theaters with giant screens. Bigger screens live in bigger rooms with bigger sound. Bigger is better, right?

Since the earliest installations of large-format film projection, the audience has connected with this form of education and entertainment in a very special way. While the public's fondness for this unique medium has matured, presentation technology has made huge progress in the past decade. Unfortunately, many theaters have yet to realize the benefits of some of these technological advances.

The development of modern show control has changed the entertainment and attraction industry in a big way, but many theaters are still using twenty-year-old technology, often using DOS-based computers from the 1980's. Some theaters still operate without any kind of show automation whatsoever, and they're missing out on a great opportunity to improve theater operations while maximizing under-appreciated revenue streams.

There are four big reasons to use a show control system in the world of Giant Screen and specialty cinema:

In order to better understand the possibilities created by a well-designed show control system, let's explore how a theater might use this technology to create a more powerful presentation. We could choose any theater for our example, but for this case study, let's consider a medium-sized dome theater running a dinosaur film on a 1-hour turn. From the guest's perspective, the experience might go something like this:

Without Show Control: You purchase a ticket and either wander off into the museum to kill time before the film begins, or you move to the queuing area where you stand staring at the projection equipment through a glass window, checking your watch periodically. Right before the show begins you watch as the projectionist loads film into the projector. This represents a big missed opportunity for branding, sponsorship and advertising.

With Show Control: You purchase a ticket and move to the queuing area where a series of short videos is played. The mix includes trailers for upcoming films, information about exhibits within the museum, and advertisements thanking the sponsors for their generous contributions. As the projectionist begins loading the projector, a pre-programmed presentation begins using audio narration, video and LED lighting to highlight various components in the projection booth and explain the amazing technology behind the presentation you are about to experience. From the moment you step in line for the film, you're actively being engaged, which reinforces the idea that you've made a good decision with your investment of time and money.

Without Show Control: You walk into a conventionally-lit theater with music playing in the background. You take a seat and look forward at a blank screen. Once again, you find yourself checking your watch with little to do. "I wonder what's happening on Facebook?"

With Show Control: As you walk into the theater, the ceiling opens up into an expanse of enveloping sound and undulating blue from the LED cove lighting system. You take your seat as a trivia question about dinosaurs fades onto the screen. Then the cove lights gradually fall from blue to amber. A video slide explains just how large the dome screen is and claims that the lamp is so bright you can see it from the moon. "Wow, that really is bright!" Then a short video piece details how a local company invests in the community,  supports the museum, and even made it possible for you to see this film about dinosaurs. As the lighting changes gradually from amber to a deep green, a pre-recorded announcement explains that the next film will be about dinosaurs. Next,  the answer to the trivia question is revealed. You got it wrong. That's why you came to watch a documentary about dinosaurs, right?

The green lights fade into  a deep magenta and an image on-screen informs you that the soundtrack to the film and several other interesting items are available in the gift shop. You also didn't realize that you could present your ticket in the museum cafe for 10% off of your order until an slide about the coupon appeared on the screen.

The colors change again, and a countdown clock appears indicating that the show will begin in two minutes. A series of slides urge you to turn off your cell phone, be considerate of the people around you, and then a pre-recorded announcement explains what to do if you need to leave the theater after the lights go down.

Without Show Control: An usher pick up a microphone and introduces the film. The lights fade, and the film begins. 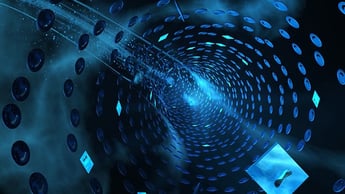 With Show Control: The lights fade as a bed of music swells. An animated presentation uses characters to lead your eyes around the room as the sound system shakes the floor. The cove lighting works in concert with the video, changing colors to match the scene. At the critical moment in the presentation, the screen seems to disappear and lights behind the dome reveal an intricate framework of speakers and steel. As the sound and image fade, the museum's logo appears followed by one word fading out of the darkness... "Enjoy." For several seconds you sit in dark excitement wondering what might happen next. It is in this perfect moment of anticipation that the film begins to play.

Without Show Control: As the film ends, the house lights come up, and you escort yourself up the stairs and out of the theater.

With Show Control: As the final moments of the film fade, the house lights begin to rise, and a pre-recorded announcement directs you to exit up the stairs at the back of the theater and invites you to come back soon. On the screen, a slide once again recognizes the sponsor, and thanks you for visiting.

What Can Theaters Do?

The difference between these two experiences is plain to see. Without a show control system the presentation may or may not start on time, and numerous opportunities to reach your guests at a deeper level are missed. With a modern show control system you prepare your guests for an awesome experience, and then you deliver it. You keep them engaged throughout the presentation, reaching them with the right message at the right time... every time.

This consistency will translate into a stronger brand which can yield numerous opportunities to capitalize on sponsorships and local advertising.