You Won’t Believe What is Happening in Downtown Trussville.

What began as 12 acres of underutilized real estate of old warehouses and auto repair shops has been transformed into the new centerpiece of the Trussville community.

Anchored by the Ferus Artisan Ales brewery, Trussville’s sparkling new attraction features an outdoor concert venue big enough to host national touring acts, an incredible 27-foot-wide LED screen backdrop bright enough to watch movies or football games in broad daylight, and a pavilion area with the capacity for a farmer’s market or up to 2,500 concert spectators.

This inspiring improvement is the result of the vision and efforts of the City of Trussville, developer Coby Lake, and the talents of architectural firm TURNERBATSON, landscape architect firm, Dix.Hite, civil engineer CCI, and award-winning sound, video, and lighting experts, MediaMerge.

“This started as a simple sidewalk and parking lot improvement project and grew into a new vision for downtown Trussville,” said Michael Mann, the project architect at TURNERBATSON. Over the course of four years, he and the team watched as that vision expanded from a simple one-block project to become a family-friendly, walkable entertainment district that includes a regional concert stage and pavilion, surrounded by restaurants and shops.

Momentum on the project really took off when several adjacent properties were purchased by Coby Lake, well-known around Birmingham for Avondale Brewery which kickstarted the rejuvenation of the Avondale area. Inspired by family-friendly entertainment areas such as “The Hub on 30A”, the city, design team, and Coby collaborated to make the dream a reality. 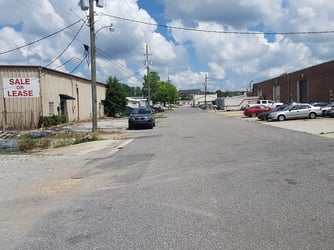 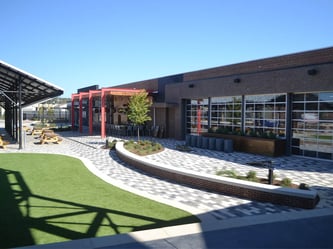 The unbelievable before and after transformation of the Trussville Amphitheater.

As the vision for the project grew, the design team came to realize they needed to scale up the audio and visual scope of the project. In order to do it right, they knew they needed a team with true expertise in this category.

“After working with Tim Ogletree on the A/V system at Vestavia Hills United Methodist Church,” Michael Mann said, “I knew we needed a consultant like MediaMerge on board to handle the technical elements beyond our expertise.”

MediaMerge is known nationally for creating sound, video, and lighting systems for projects ranging from concert venues and churches to immersive museum experiences and commercial AV for high-end corporate offices. This wide breadth of expertise gives them a unique skill set to draw from. They knew it was important to work side-by-side with TURNERBATSON during the planning and design stages of the project to ensure critical details were addressed.

"Michael and his associates at TURNERBATSON are foremost team players and their personal investment, attention to detail, and commitment to finding the right balance of form and function are what make projects like this successful. The further we got into the project, the more we all realized the potential,” said Ogletree.

“The challenge was to create a venue that could support high-level audio, video and lighting needs for touring acts and also serve the needs of a number of other uses, whether it was local talent, Friday night movies, Saturday football broadcasts, or any of the various city events that happen throughout the year. This involves a wide range of requirements and user skill sets. Needless to say, the project needed to fit within a budget the City could justify."

MediaMerge’s expertise proved pivotal when it came to articulating how much the city’s returns could be improved by investing in systems that were not only functional, but would also garner the attention of national concert promoters. “We always strive to take a holistic approach beyond just technical solutions,” added Ogletree. “Ultimately the success of a project is not judged by equipment or technology but by how well it serves the needs and the exciting experience it creates.”

Mayor Choat has been eager to show the venue to concert and event organizers. “A big concert promoter from Louisiana recently came to see what we’ve built and they were, quite frankly, blown away,” Mayor Choat said, “They never expected to find something like this out here.”

From Autos to Ales

An old storage and auto repair shop is now the home of Coby Lake’s new endeavor, Ferus Artisan Ales, which opened in October 2019. The interior design resembles the feel of a mountain retreat yet still incorporates many of the features of the warehouse including steel doors which were replaced with glass overhead doors that can roll open.

Adjacent to the brewery, the new stage and green space have already been used as they kicked off the SEC football season during a soft opening on September 26. It was a taste of things to come as the day began at 11 am with a broadcast of the Auburn-Kentucky game. Then a series of performers took the stage before the Alabama-Missouri game which started later that evening.

Throughout the day, families tailgated at the pavilion, enjoying cornhole, tossing footballs, and sampling food and drink from the nearby restaurants. The vision of creating a community gathering place in downtown Trussville has finally come to life.

The Trussville pavilion welcomed the kick-off of SEC football, September 26, 2020.

While the amphitheater and pavilion near completion plans still remain for the rest of the area. A number of restaurants are in the design stage as well as a playground and retail with loft condos above.

The Attraction Comes to Life

At night, the glow from the stage draws attention from traffic on Highway 11, and soon, the Mayor hopes it will be seen by many more as the venue draws people from all over to enjoy a concert, a draft beer at Ferus’s spacious outdoor bar, or a relaxing evening out with the family.

“This is rewarding for the city,” Mayor Choat tells us, “The city council has been talking about it for twenty-seven years, having something downtown where people can walk and enjoy.” The Mayor added that a formal dedication ceremony is planned for later in October.

“It’s an architect’s dream to have a role in this transformation,” Mann says, reminiscing on the satisfaction of seeing years of work finally come to fruition, “I think this project is going to change the way people experience Trussville and will be a beacon for neighboring communities.”

Seeing the impact these renovations have already had on the city’s surrounding areas, it’s clear that Trussville is striding boldly into a new era of opportunity for its growing community.