For more than twelve years, MeadowBrook Church in Gadsden, Alabama, has been holding their Sunday services in a gently converted gymnasium. The basketball hoops may be gone, but underneath the rows of stackable chairs, three-point lines and free-throw zones are still visible. Originally intended to be a temporary solution while construction of the new Worship Center got underway, the gymnasium became MeadowBrook’s primary place of worship as their vision for renovations grew to be bigger than their initial budget. 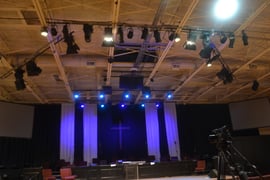 When it finally came time to bring the vision to life, the Church awarded the project to Black Design Architecture. BDA was selected, in part, because they would employ a “Design-Build” approach to the transformation which means the architect and the general contractor work together in a design-build format, but it is still the general contractor’s responsibility to hire and manage all the subcontractors for construction.

The Worship Center would become the centerpiece of the project as the new sanctuary would fall between two older buildings making it the literal and metaphorical connecting point between the past and the present. The other aim of the renovation was to create more common areas and spaces that would foster a sense of connection and community. These included a new foyer and a cafe.

A new entry behind the worship center, a common area, and cafe add a greater sense of community to the space.

When it came to the audio, visual and lighting for the sanctuary, MeadowBrook Church partnered with MediaMerge, an award-winning sound, video, and lighting experience company that specializes in church sound systems, corporate audio-visual services and museum environments.

Using His Gifts To Glorify God

This philosophy laid the groundwork for BDA and the MediaMerge design team when they began drawing up plans for a classic radial stage with high ceilings and a gradual incline to the seating area. In addition to bridging the old and new, they took into account a desire to create an intimate and warm setting. It’s no accident the floorplan of the Worship Center is wider than it is deep. The end result is that the congregation always feels close to the speaker on stage, enabling them to keep their eyes focused on a real person instead of a video screen. Most of these details will go largely unnoticed by the churchgoers, and that’s just what the design team intended, yet it will create an effect of closeness for every person in spite of the sanctuary’s 700-seat capacity.

Designing Sound Around the Space

“I know from past projects that you want the back of the ceiling angling down so that sound can bounce back and be all-encompassing in that space,” DiGiorgio said. “MediaMerge helped tweak the design and that and led us to choose a perforated ceiling panel that absorbs sound but also bounces some of it back.”

DiGiorgio noted that there’s a give-and-take between how something looks and how it performs, but he admitted that including MediaMerge during the early stages of the design process enabled the team to strike the perfect balance.

MediaMerge’s video design integrated a very wide projection screen into an architectural facet in the rear wall of the stage. The lighting design provided a combination of pattern and colored light to wash up the side of the walls and out into the seating area. The stage ultimately blends into the seating which visually breaks up the distinction between the congregation and the worship team on the platform. The resulting connection enhances the sense of community and adds a touch of intimacy and drama to the space. 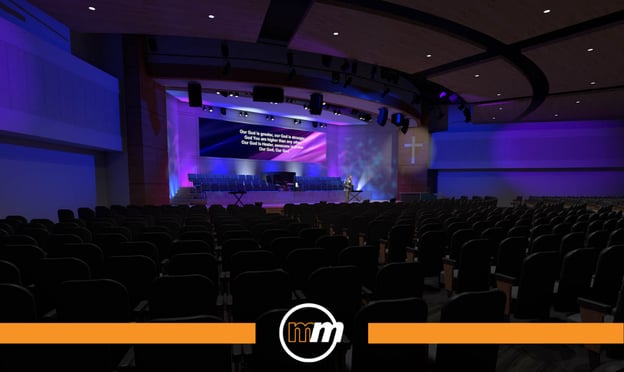 “A lot of design consultants will just draw up a schematic based on their idea of what would look and sound good to them,” said MeadowBrook Church’s Communications Minister Daniel Doak. “MediaMerge actually took the time to listen to our goals and even visit our services to see how they could help our new sanctuary to best serve the needs of our church.”

“When technology is designed well, it can help create an environment that immerses the congregation in a shared sense of community,” said Ken McKibben, President/CEO of MediaMerge. “God has given us these gifts, the tools of video, light and sound, to create beauty and to glorify Him in the same sense that the Church might have historically used vaulted ceilings, sculpture or stained glass. Our ultimate goal,” he added, “was to create an atmosphere that is conducive to worship.”

“It always feels amazing to stand inside a completed project,” architect DiGiorgio said. “It means a lot to see it go from drawings and renderings to a real place where people gather to have meaningful experiences. This was the kind of project that reminds you of why you do what you do.”

In spite of weather and COVID delays, the renovation project finished in time for services on December 13, a welcome Christmas gift to the MeadowBrook community.