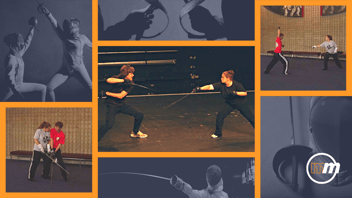 Nikki is the office manager and purchasing agent for MediaMerge, but she didn’t always work behind a desk.

Growing Up a Fighter

“Ever since I could walk,” Nikki recalls, “I’ve been interested in some form of combat.” Through her childhood and into her young adulthood, she practiced and trained in martial arts, reaching the rank of second-degree blackbelt before heading off to college.

That doesn’t mean combat was the only thing that interested Nikki. In fact, once she arrived at Birmingham-Southern College, theatre was the field that caught her eye, and she majored in Theatre Arts.

Extreme combat skills aren't exactly commonplace; they tend to stick out on a resume. One of Nikki’s professors at Birmingham-Southern was a member of a workshop sponsored by the Society of American Fight Directors. SAFD is a global organization dedicated to improving both the safety and skill of all aspects surrounding stage and film combat.

Nikki’s professor mentioned the workshop and that piqued her curiosity. She gave the workshop a try and instantly fell in love with the field of stage combat, the perfect marriage of her interest in the theatre and martial arts.

Nikki has been to the national workshop three times, and out of the eight recognized stage combat skills, she studied and became proficient in six: unarmed, broadsword, rapier and dagger, knife, sword and shield, and small sword.

If there’s anything worth bragging about, it's skills with a broadsword.

Nikki’s skills carried her to the position of assistant teacher at Long Island’s Adelphi University. She also taught the combat scenes and safety procedures for a number of Off-Broadway shows.

So what actually goes into a play’s fight scene?

“If theatre combat is bad, it’s very, very obvious,” Nikki points out. “People remember action, so it has to land.”

Unfortunately, not all theatre directors believe this, and the production suffers for it. It doesn't matter if an entire act is a fight scene or just one minute of the presentation, a fight coordinator is always needed to ensure quality and safety.

That safety aspect goes doubly for the theatre; there’s no cutting or CGI to help close the gaps between a sword hit and an actor's shoulder in real-time. Nerves can also flare up in actors before a fight scene, even with proper training. A good fight coordinator can teach these actors how to view the art of stage combat as a routine, helping them stay cool, calm, and collected even as they show off swordplay and chaos on stage.

In order to make combat scenes work, fight coordinators have to understand the limitations of theatre.

“There’s a rule in theatre, called the six-foot rule,” she says. It’s all about the perspective of the audience in relation to the actors on stage. You have to take into account that the audience members have fixed positions, so everything done on stage has to be exaggerated to ensure every seat can see it, without coming off as silly. Film can get a camera as close as they want to the action or use strategic editing, but the theatre has to work with a fixed viewer.”

The Fighter at MediaMerge

When she first started about two-and-a-half years ago, she worked as purchasing agent. Thanks to expertise stemming from her time as prop master for the Birmingham Children’s Theatre, that expertise in purchasing and acquiring materials bled over into accounting, and Nikki grew more and more vital to operations at MediaMerge.

This isn't to say she doesn't help in the construction of exhibits. Nikki oversees the development and application of the textured crackle effect of MediaMerge’s Living Canvas™ talking portraits, giving them the illusion of being actual oil paintings. The effect took hundreds of hours of research and prototyping to perfect, and it is a guest-favorite in the museum exhibit community.

“If a theatre degree teaches you nothing else, it’s that you have to be versatile; you do pretty much any job that needs to be done when you aren't doing your job. I can’t reveal the secret of the crackle effect, but I can say that it looks amazing and that I’m very proud of it.”

Nikki's current roles and responsibilities at MediaMerge might not be your first thought when you picture the stage combat elite, but she loves what she does.

“If you told me ten years ago that I’d be in love with my job here at MediaMerge,” she says, “I would’ve called you crazy, but I do. And I love the fact that they let a kid come in here and take over purchasing and management roles, and still let me help on the creative side of the company, is honestly a gift.”