What is the ShowSource Media Server?

To state it simply, the ShowSource media server is a very powerful computer with software that can play audio and video files for specialty cinema presentation, museum exhibits and themed-attractions. The software also includes a timeline-based show control system that can be used to automate lights, playback announcements, and trigger special effects. 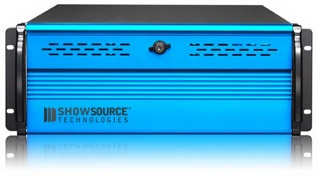 Why was the ShowSource developed?

In 2006, several IMAX theater owners approached MediaMerge about developing a sound source that could work for their venues. At the time the only technology capable of synchronizing with the 15/70 giant screen projector was being manufactured by IMAX.

As MediaMerge began developing the sound source, features were added to address other needs in the theaters. With it’s high-resolution digital video playback and sophisticated show automation system, the ShowSource evolved into on one of the world’s most powerful media server platforms.

The server includes so many features and capabilities that it can be challenging to explain just what the ShowSource is. The server can be used in interactive museum exhibits where video playback is triggered by museum visitors. It can provide playback for a dome theater presentation of educational films, and using the show automation system it can control the motion base on a ride simulator while also providing audio and video playback.

The ShowSource is currently operating in a wide range of applications including museum exhibits, 4D/5D theater experiences & themed attractions like dark rides.